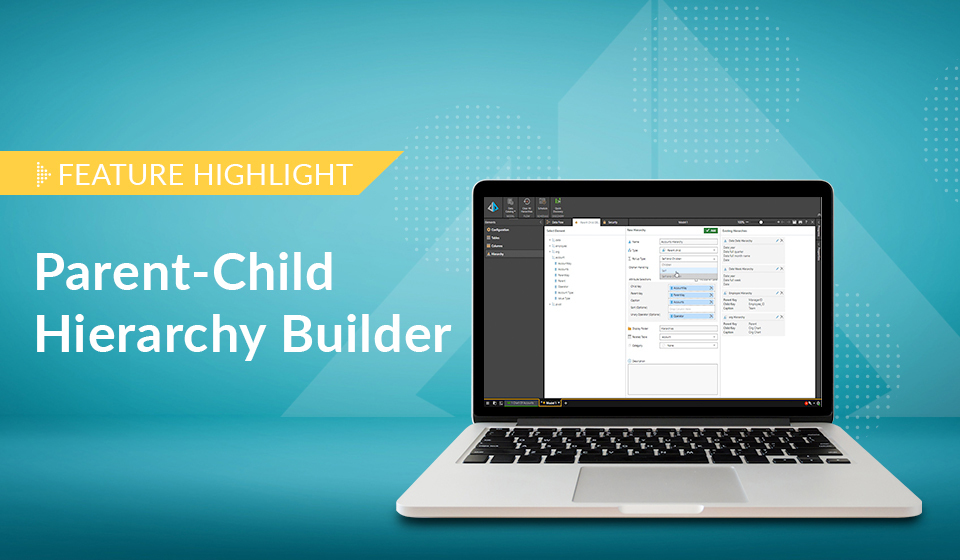 Parent child hierarchies are used to depict the hierarchical, iterative relationship between all members that appear in the same table, enabling a graphic portrayal of the relationships, and facilitating the aggregation of all members according to the hierarchical structure. Reporting on parent child hierarchies is a critical function required in applications that use data structures like a chart of accounts, organizational structures, bill of materials, and many others. Hierarchical reporting for parent child relationships requires specialized iterative capabilities and is usually difficult or impossible to resolve with alternative work arounds. Pyramid’s extensive support for parent-child hierarchies, delivers elegant reporting with full hierarchy expansion and collapse, and provides hierarchical accumulation, directly on supported data sources without requiring data ingestion or data source manipulation.

The unconventional nature of the parent child hierarchy does not lend itself well to classic reporting and data aggregation. Rolling-up or aggregating all members of a parent child hierarchy in a relational data model requires iterative logic to snake through the hierarchy one item at a time. This places an enormous burden on resources, making it infeasible to process data in its’ native format. As a work around, some solutions involve complex pre-processing to flatten the hierarchy, ensuring each child record contains a distinct parent column for all preceding levels. This forces building additional columns back to the data source; or duplicating data to a new data source. And most often, it produces structures that can go stale quickly, so constant hydration is required – challenging the very notion of “a single version of the truth.”

Pyramid’s “Model” app provides a code-free, drag-and-drop interface to define parent, child, and descriptive columns in a data model. Pyramid generates the hierarchical structures on the fly, automatically recognizing all levels present in the hierarchy, and generating metadata for each of the levels in the hierarchy dimension. The newly generated data model facilitates direct query on the existing data source, using the parent child hierarchy to aggregate and display data as needed.

In addition, Pyramid provides several options for calculating rollup aggregates within the elements of the hierarchy to meet business logic requirements. So, an operand per member element can be used to determine whether each item is added, subtracted, or ignored when aggregating up the hierarchy.

Specifically for accounting applications, another feature – cumulative measure aggregation – can also be added to a data model that applies accumulation of a measures for balance sheet numerical operations. Numerous complex accounting problems can be solved easily and quickly when both the accumulation and operand functionality is combined.

Carla is a BI Analyst at EZ Trading where they have a SnowFlake Data warehouse with Pyramid for their Analytics. Their chart of accounts defines the parent child relationship, with many different levels or reporting, resulting in a typical ragged hierarchy. 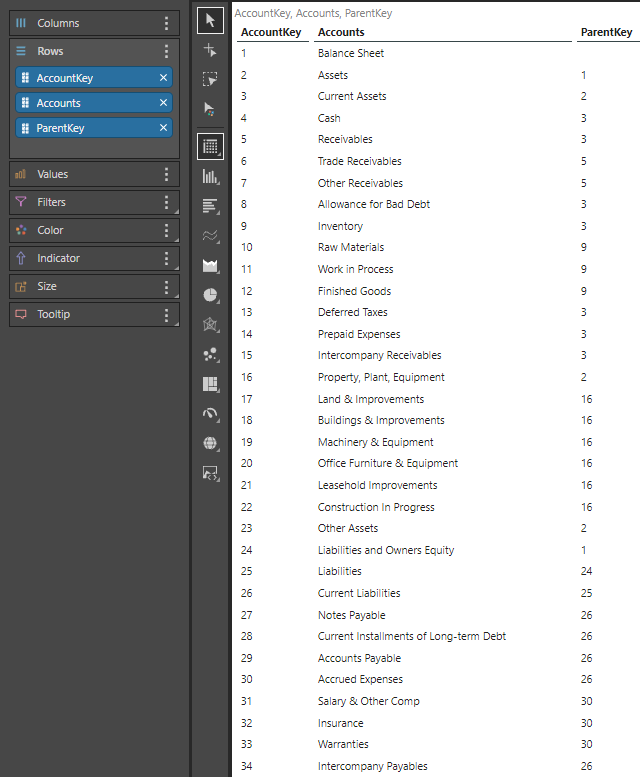 Carla wants to create a data model that will reflect all levels in the financial structure. She used the Model tool to define the parent child relationships - using the AccountKey to define the Child Key, the ParentKey for the Parent, and the Accounts column to be used as the caption. 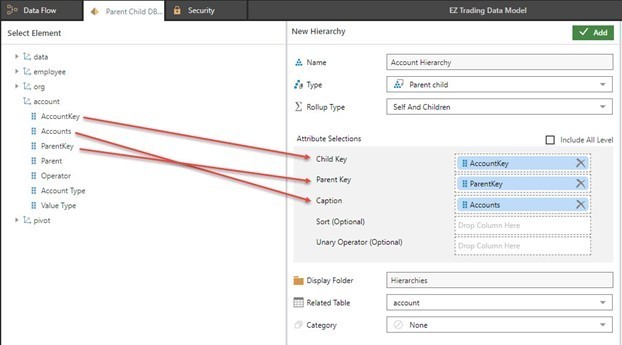 Next Carla wants to display all values in her chart of accounts as positive, including expenses and sales returns. However, she wants to subtract expenses from revenue to result in a net revenue amount. Carla uses an “operator” column to indicate what to add or subtract when aggregating lower levels - so she simply drops the “Operator” column into the Unary Operator property. Finally, she defines "Children" as the Rollup type to that any parent element is simply the aggregation of child values. 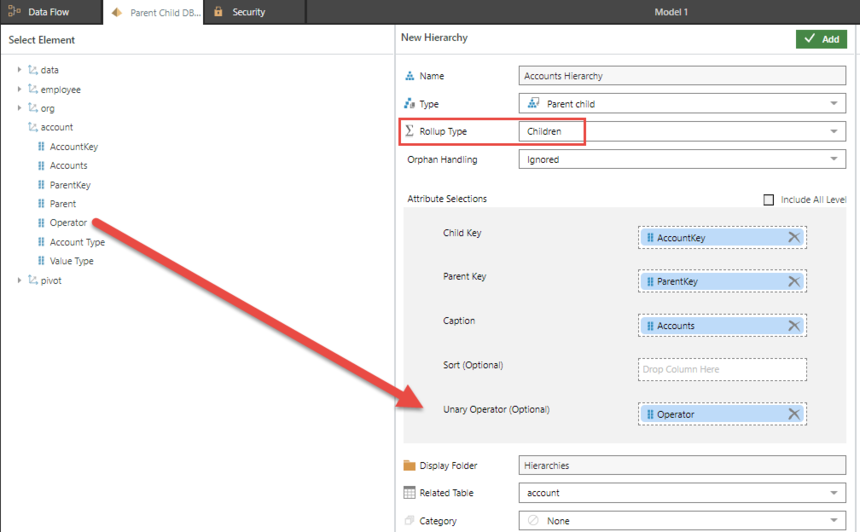 Once the model has been saved, Pyramid instantly generates the hierarchical structure, automatically recognizing the six levels present in the hierarchy, and generating metadata for each of the levels in the Account hierarchy dimension. 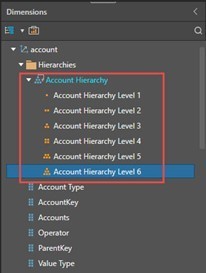 Carla then uses her new model in a report to display the relationship between the accounts and all children and descendants.

We see that asset and liability amounts are displayed as positive amounts, but nevertheless, in the background, the unary operator is used to ensure that the balance sheet amount is 0 (by subtracting liabilities from assets). 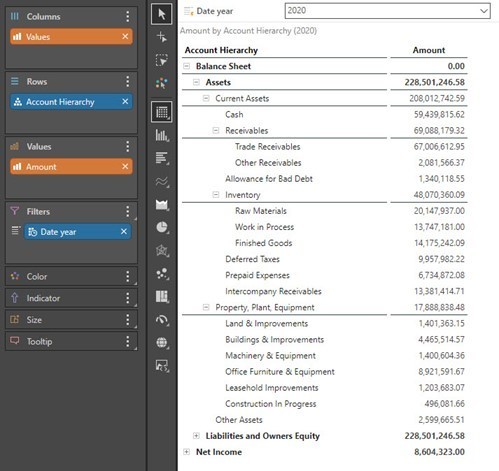 And finally, Carla displays the cumulative balance sheet amounts in a hierarchical tree structure, depicting the annual cumulative effect with simplicity and clarity without requiring complicated manipulations and formulas. 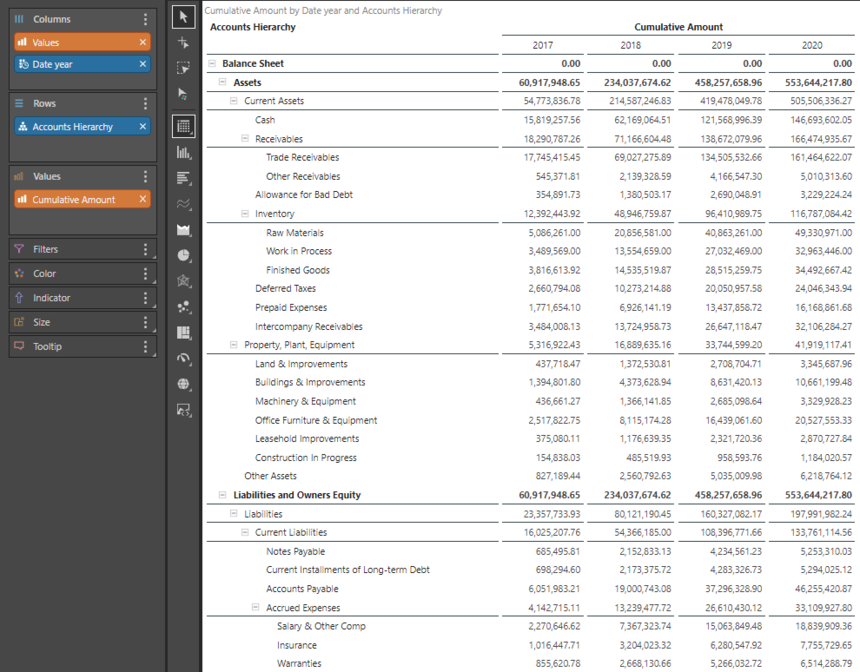 Parent child hierarchies are critically used in financial and other applications to graphically portray relationships between members.