Consider the following grid. Countries are shown on rows with quarters shown on the columns. Within each quarter there are three measures.

We can use the “Eliminate Entire Column” option to remove specific measures from selected quarters.

If we remove Net Profit from the Qtr 2 2009 column the grid becomes asymmetric. We could also use the Multi-Element option to remove multiple inner columns in one action.

Result of Eliminating One Measure from One Column 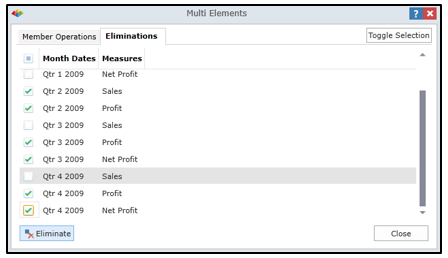 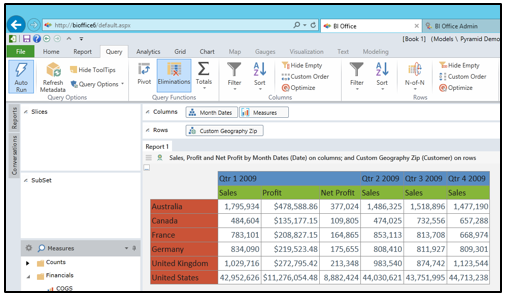 This works really well to construct a specific asymmetric grid.

However, if you wish to make the grid dynamic, for example driving the quarter selection via a parameter for use on a storyboard, the eliminations are lost because the columns are eliminated on the combination of the column headers, Qtr 2 2009 / Profit, Qtr 3 2009 / Net Profit, etc. If a year parameter is used to drive the respective quarters, the new grid does not contain 2009 quarters so the eliminated combinations of quarters and measures are not there to be performed.

Result of Using a Parameter

I encountered a real life situation on a recent consulting day with a customer whereby the customer wanted the user to be able to choose a quarter, display three measures for that quarter, then show the previous four quarters but only show a single measure for those quarters.

We cannot use eliminations because the quarter is dynamically driven and the combination of quarters and measures changes. I needed to find a different solution.

The answer lies, as usual, in Dynamic Sets. In this case, it is useful to think of the quarters as two sets, one containing the selected parameter, the other the previous four quarters, again driven by the parameter.

Let’s start with creating our quarter parameter. As we want to show the previous four quarters from the selected quarter, we will restrict the parameter to containing quarters from 2009 and 2010: 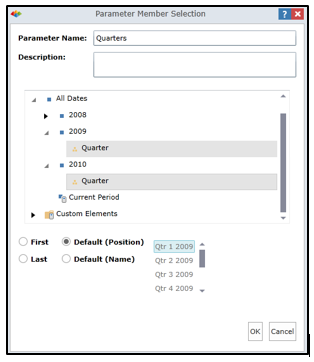 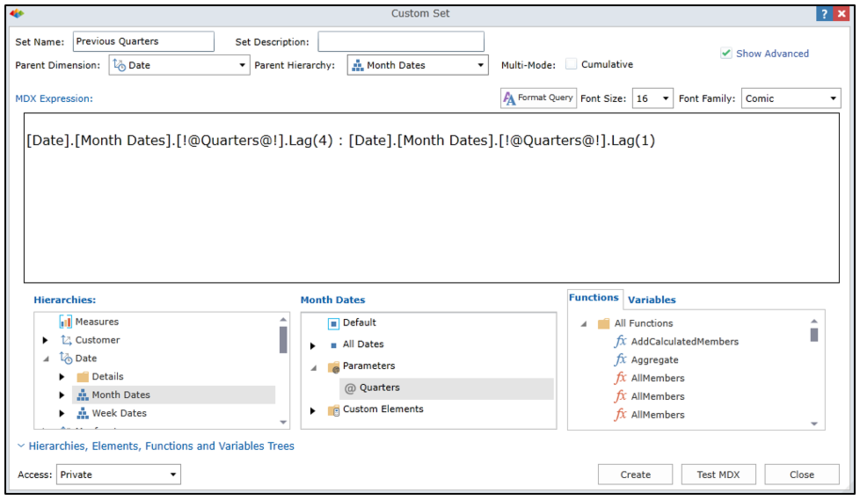 Using the MDX Editor to Create a Set of Previous Quarters

We then need to create our other sets. These will consist of the parameter in one set, the single measure to appear under the previous months in another, and the measures to appear under the selected month in the third. All these can be created using the simple slide-off from the element tree. 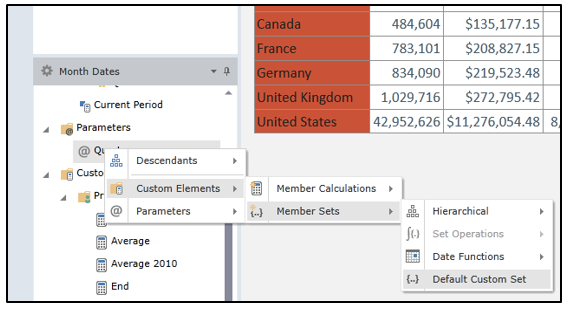 Creating a Set of a Single Quarter

Creating a Set of Multi Measures

Creating a Set of a Single Measure

Create a new blank custom set from the Analytics tab. We can either use the explicit CROSSJOIN(<set1>,<set2>) function or the implicit <set1> * <set2> operator. Both give the same results. 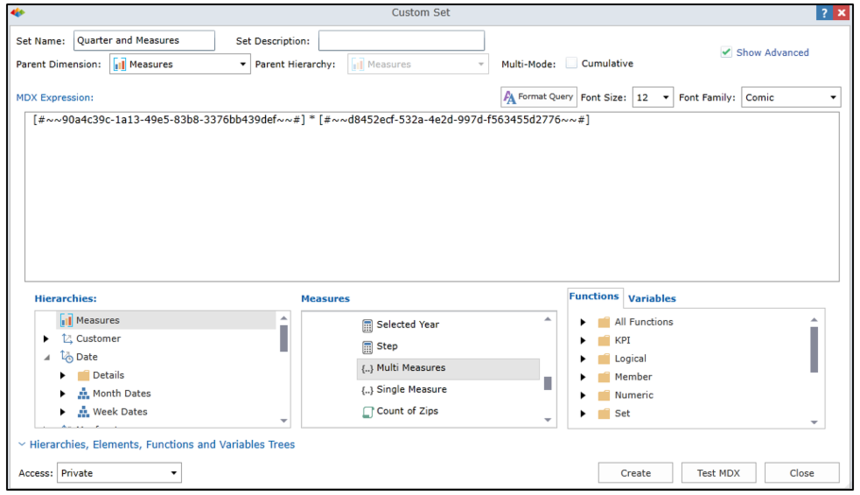 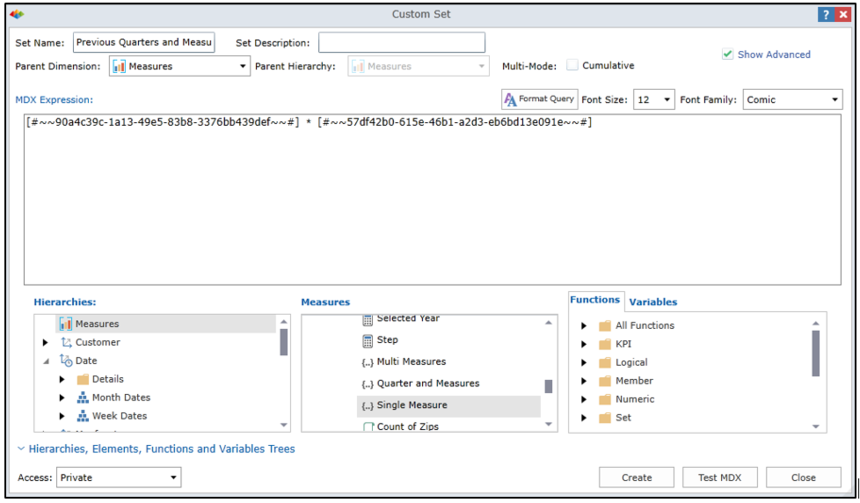 We can now select the two sets to be displayed: 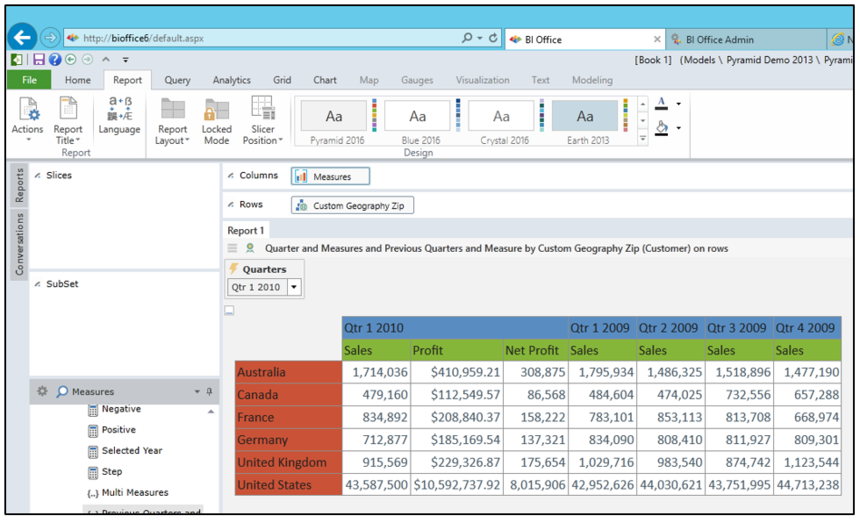 Changing the parameter quarters to Qtr 1 2009 allows us to see the sales, profit and net profit for that quarter and just sales for the previous quarters: 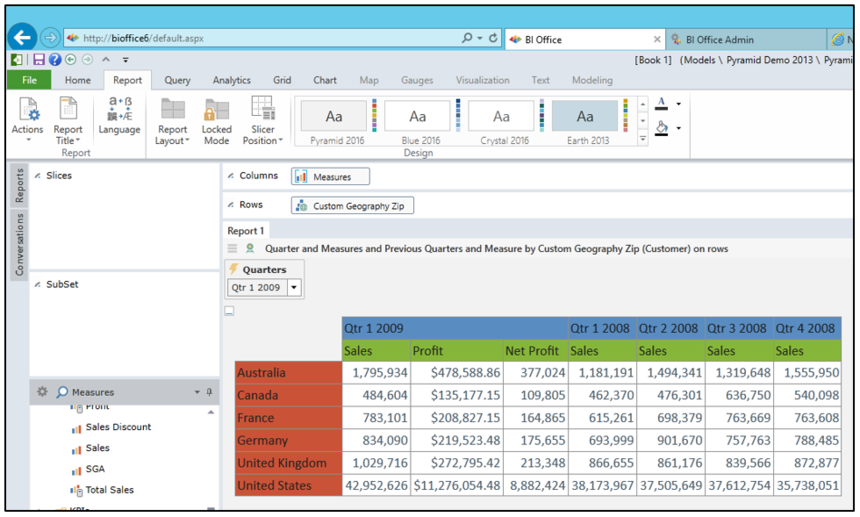