In an effort to get our customers off to a quick start with the new Prediction Wizard, the R developers at Pyramid Analytics have created this use case to illustrate how prediction capabilities could be of assistance to a typical bike sales team.

In our use case, the fictional VGD-BIKES is a chain store with sales offices throughout the USA. The Boston branch has a tradition of organizing popular trail races on Thanksgiving Weekend each year. The winner of each age/gender group is awarded a free trail bike. Participation costs $30 per person, but if you fill in an online survey you can enter the race for free. The survey is used to gather personal data from participants, such as name, age, gender, address, profession, income level, home ownership, marital status, number of cars owned, and number of children (dependents).

The Sales Manager in the Boston branch, named Bob, organizes the Thanksgiving races and leads all sales activities in the Boston branch. After the races each year, Bob is left with approximately 1000 names of new participants who serve as a "prospect base" for the coming year.

Bob has detailed sales records for 2016, meaning he can compare the 2016 survey data against the actual 2016 sales results. Bob wants to use the new Prediction Wizard to create a predictive model based on the 2016 data. The predictive model will be used in evaluating the “prospect base” for the coming year (2017) and for future years. The predictive model could also be used by other branches of VGD-BIKES.

Gliding Through the Wizard with VGD-BIKES

Bob loads into BI Office the data model created by the VGD-BIKES database team. Next he opens the Data Discovery/Analytics ribbon and selects the Advanced Prediction command.

NOTE: This is a good time to mention that to activate the Prediction icon, the user needs to be working with a tabular data model and needs to have read/write access to that model.

Prediction icon appears when you load a tabular model for which you have access rights.

The Welcome Screen appears, as shown below. This screen has no fields, but it allows Bob to pause for a second and take in the big picture before he proceeds. The navigation panel on the left (Welcome, Algorithm, etc.) allows Bob to navigate between the various wizard dialogs in an interactive fashion. The recommended approach is to proceed one-by-one through the dialogs in consecutive order. However, it’s OK to go back and make changes in earlier dialogs when necessary.

Proceed step-by-step through dialogs. You can go back and make changes when needed.

In the Algorithm dialog, Bob relies on the default values for the first three parameters.

Bob will be using all 1000 names from the 2016 data to train his predictive model, so there is no need to specify a smaller subset. For larger data models, it’s recommended to perform initial training with a smaller sub-set.

To learn more about the prediction output/algorithm options, see the BI Office help.

Bob’s main goal is to evaluate which type of trail race participants are most likely to purchase a new bike in the future. With this goal in mind, Bob makes the two following selections: 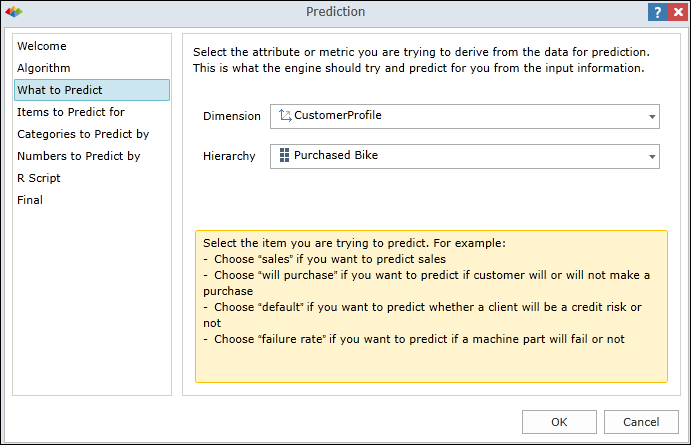 The Prediction Wizard is designed to predict a SINGLE attribute or metric.

Items to Predict For

In this dialog, Bob needs to select a unique number, value or string that serves to identify the target of his prediction. Bob selects the "CustomerProfile" dimension and then the "profileKey" hierarchy. The profileKey contains a unique identifier for each person who participates in Bob's online survey. 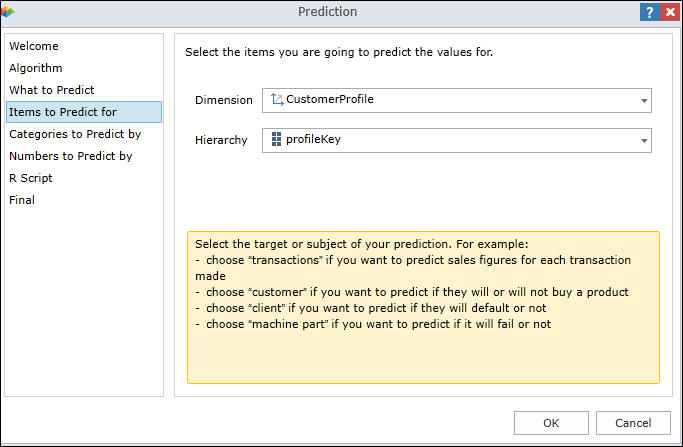 The wizard requires a unique number, value or string to identify the prediction target.

Categories to Predict By

Now comes the challenging part. Bob needs to choose a number of attribute hierarchies to serve as input for his predictive model. Bob chooses two main attributes, though he could choose as many as he likes. For prediction purposes, his goal is to discover those attributes that serve as major “statistical splicers” of the data. 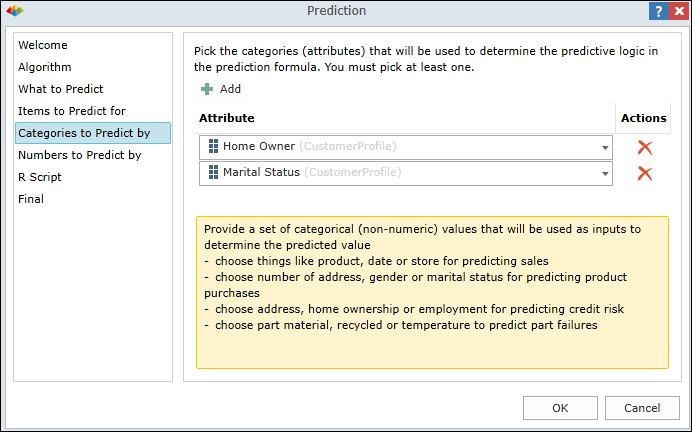 Specify one or more attributes as input for the prediction algorithm.

Numbers to Predict By

In this dialog, Bob three measures to serve as input for his predictive model.
The selected measures are used together with the selected categories to predict who will (or will not) purchase a bike. 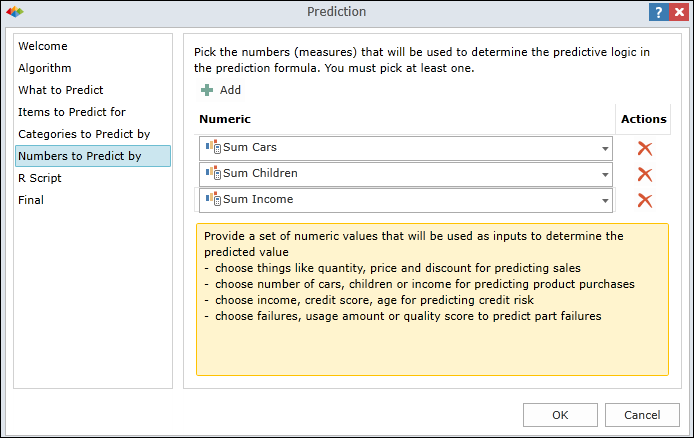 Specify one or more numeric items as input for prediction algorithm.

This dialog shows the R Script generated interactively by the wizard based on Bob's current wizard selections. For most wizard users, the script exists in background mode and can be safely ignored.

R Script is auto-generated based on your current wizard selections.

In the “Final” dialog, Bob enters a number of output parameters. Bob types in "BIKE-PRED" as the caption and also types in a short description. Bob also selects the Save Predictive Model and Save Design options. Then Bob clicks OK to put the wizard in action: 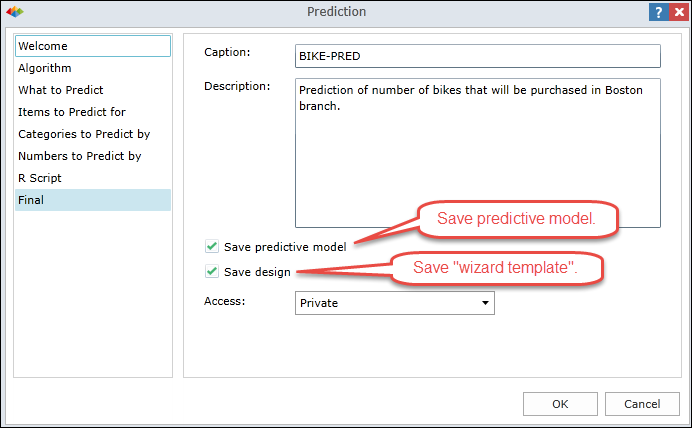 The caption serves as the name for both the wizard template and the predictive model.

To continue in this blog series, see Prediction Wizard - Part 4 (Use Case Results).